The last couple of weeks have been a sad time for Chiloquin. It began with 4 broken windows at Chiloquin Open Door, then expanded to 6 broken windows at the Community Center, followed by a break in at Sage School where seven computers were stolen. It climaxed late last Sunday night with a rampage through town that left the Potbelly Cafe with not a single intact piece of glass, a broken cash register and a gallon of syrup on the floor. The library door then got smashed, along with the computers in the administration area, Two Rivers Gallery broken into and display cabinets overturned there. Finally a truck was set on fire outside Clyde’s Market and would have taken the building with it were it not for a passer-by who pushed the truck away from the building.

The Herald and News reported that two suspects are in custody following a Chiloquin crime spree that took place early Monday morning. According to authorities, one is still on the run. The three individuals, ages 14, 15 and 16, face charges of arson, burglary, theft and criminal mischief, said Klamath County Sheriff Frank Skrah.
Whether the third suspect has been apprehended is unclear at this time.

This has been an ongoing problem for Chiloquin for many years, and though there have been many suggestions over the years it is usually the lack of funding that prevents any real measures from taking place. However, some residents are planning a community watch program, which will see its first meeting take place Saturday, Aug. 8 at 6 p.m. in the Chiloquin Community Center.

A Rebuild Chiloquin fund has been created for anyone interested in donating. Checks can be sent to Chiloquin Visions in Progress, P.O. Box 204, Chiloquin, OR 97624. Please indicated on the check that it is for the Rebuild Chiloquin Fund. The money will be divided among all the businesses that had losses. It is hoped the fund will cover insurance deductibles and other uninsured expenses.

It was the video footage from the Community Center security cameras that allowed such a quick response by the authorities. If you have not seen any of the coverage, this is the footage recorded by Two Rivers Gallery. The Community Center cameras recorded faces quite clearly, and the Gallery video caught the sound of breaking glass. Luckily, there was not much damage to the actual artwork. 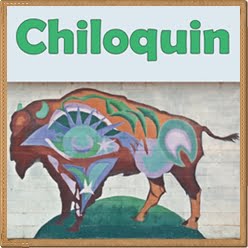